Furder coming story of GHKKPM  will see the drastic breakdown of virat and sai’s trustworthy relationship. 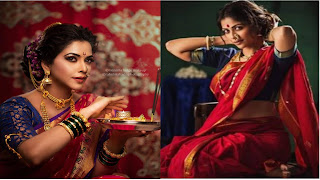 Poor sai fails to prove pulkit innocent when virat get evidance of pulkit and Madhuri’s marrage.

Undoubtedly,  Madhuri is pulkit’s wife but only on the document because of harini.

So when sai falls in a tight spot and she is blamed for ruining Devyani’s life, sai and virat’s relationship also falls.

Apparent Sly, the Holi celebration is on the peek and deepali pansar will enter during Holi sequence.

Deepali pansar is playing the character of barkha, who is a lavani dancer.

When find herself all alone amid the huge mess of pulkit, sangeeta,  and Madhuri and fails  to prove pulkit innocent ,  Barkha will help sai.

A whole pacage of entertainment and drama is coming up next in the chavan house and Virat and sai’s Holi celebration .